I really can't believe its been a month since i updated this blog :(
To be honest ,i don't seem to have been updating it all that much this year at all :(
At the start of the year 1 of my 'crafty' new years resolutions was to try and blog everyday,even if i had nothing 'crafty' to show (I think i've failed quite miserably on that one haven't i )
...For any of my regular readers,who may wonder why i haven't been blogging, entering challenges ect, it's basically like this. Upto press this whole year so far has been a kind of 'bad' year for me on a personal level. From just after Chloe's birthday things just seemed to 'go downhill' as i knew those following weeks lead upto Dan's 2nd anniversary,and those few weeks fetch back 'not nice' memories :( However even though 'that time'' has passed i sort of couldnt 'shake' myself out of it.In a few weeks it would be Dan's 18th Birthday, so not sure if that has anything to do with it or not.I can't even imagine him as 18,as to me he will always be 15.
..I think maybe i just got to a stage where 'everything' just caught up with me, Dan's death and having a new baby to look after. I've been mainly just concentrating on the designing side of things.Even that to be honest almost got 'knocked on the head' as i was soo close to finishing funky fairys :( But thankfully, a cpl of the girls on the dt talked me into carrying on with it, which i am sooo glad that they did,as i'm so glad that i have funky fairys to keep my mind occupied :)
Plus funky fairys just seems to be going from strength to strength,which iam so grateful for. I have lots of lovely customers,and gaining new ones everyday! And some of them send the most lovely emails...and thats what makes it all worth while :) As long as people like what i do, i shall continue doing it :)
The past 4-5 months though ive been mostly designing rather than crafting:( Thats one thing that i don't like), i always said that if the designing 'got in the way' of my crafting,then i would give the designing up!
The past few months though i can't say that its the designing that has got in the way.its more myself and personal issues,that have resulted in my mojo being 'extinct'..I haven't even been doing any crafty shopping either *Shock,horror*
I love to craft and create things...i find it relaxing,so iam going to try my best to do some,to start joining in with the challenges again, even if i only manage it a couple of times a week.
Iam pleased with myself tonight as i have actually managed to create a cpl of things for 2 challenges! So thats cheered me up :)
..When i get in the mood/frame of mind that ive been in the past few months, i dont like to blog ect,as i don't want to just keep coming out with'depressing' stuff and making everyone else feel miserable too, so i kind of 'detach' myself from people. I find that way better than depressing everyone :) I know i have a couple of 'humble pie' emails to do*You know who you are* (If you are reading this then i hope you can understand why i haven't 'been in touch' lately!)
I don't normally write anything really personal on here, but i felt i had to get it off my chest as it were, as i dont want people just thinking that i'm ignorant ect.
For so many months i've been kind of hanging on the 'middle' of a ledge, where one way is down and the other way is up, so many times its felt like ive been 'tipping' over to the 'down' side of that ledge :( and thats not a nice place to be :( At the moment though i feel as though im moving more to the 'up' side of that ledge :) thats the side i want to be at, and hopefully things will improve each day (I hope)
...Anyways ...enough of me waffling on :)
I've just been to Glastonbury festival! First time ive ever been,all i can say is that place is HUGE! I will do another post about that and have lots of pics to share too :)
For now i shall leave ya with these 2...lol 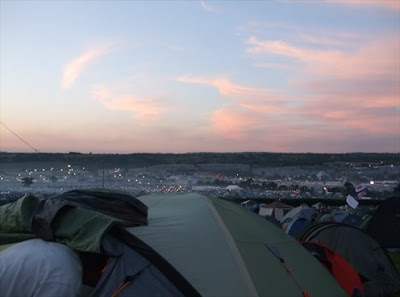 This was taken on the Wednesday evening just after we had arrived and got the tents up! It took up 14 1/2 hours to get there :( We got 10 miles away,and then we were stuck in a jam for 10 hours!!! We must have had to camp the furthest place away from everything that you could possibly be, up the top of a hill too :( 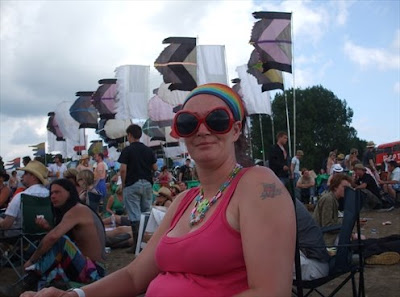 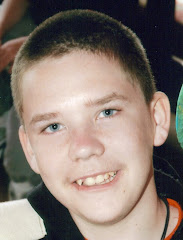